As of 1 April 2020, Raf Simons has taken credit for Prada's latest collections in partnership with Miuccia Prada as a co-creative director. In recent seasons, the fashion house has been drawn to simplicity by looking back to the fundamentals of fashion and stripping garments of complication for the realities of living. This exploration was nicely executed and showcased through the Fall/Winter 2023 collection in Milan Fashion Week titled "Let's Talk About Clothes". The theme itself sought after a feeling of simplicity with softness, comfort, exaggeration and intimacy.

Collars are Accessories
The entrance of the first model at Prada's fall menswear show in Milan stole the attendees' attention with a distinctive item on his neck. The model came with a single-breasted jacket and bare chest. As for the attention stealer, the pointy wing-like detachable collar was snapped out with pink fuzzy angora details. 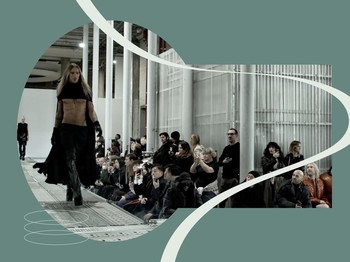 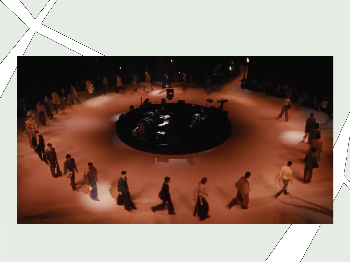 Although this is not the first time that Miuccia Prada has separated a collar from its body, the pointy collars and hints of colorful angora sweater buttoned into the jacket is one of the highlights Raf Simons and Miuccia Prada presented in the show.

Sensational Outerwear
It's been said that all Prada shows are somehow repetitive. But still, it was hard to find fault in the tailoring. The boxiness of the jackets are played along with slim and tapered pants. From woolen topcoats, boxy single-breasted jackets, cardigans to mega-sized bomber jackets, the duo redefined the fashion house with a futuristic twist, creating a combined vision that blends Simons' love of the dark side and Miuccia's craze for sophisticated luxury.

Miuccia Prada stated that these pieces were a response to the realities of living today. "It is a complicated moment in the world - and we react to it. The most honest thing we can do is to create something useful for people today—to face reality in, and frame the idea of our reality through clothes. We want to create fashion with a significance and a meaning—that is the value of fashion today," she stated.

Bulbous Duvet-like Pieces
Giving the whole collection a slight twist of zaniness, Prada presented pieces of the collection that answered the invitation package which came as a cushion and its pillowcase with white padded, maxi-volume puffer jacket, crew neck sweater and tank tops. The pieces came with duvet loops strapped to the bottom corner.

Something to Carry
Aside from the classic Prada pieces, the show also teased the attendees with clean and sophisticated leather hand tote bags which were presented in neutral colors. The A4-sized tote is made with a type of aluminum base at the bottom. The fancy tote bag is not made just for your laptop, smartphone and notebook, it's also designed for you to carry your lunch—given the fact that water bottles were inserted for a showcase in the runway.

Taking the space of the Deposito of the Fondazione Prada, the show's venue exposed the concrete shell of the building. The dimension was re-engineered and altered by raising the ceiling to transmute the space from intimate to grand for the collections to make their lavish entrance.

The co-creative director Raf Simons took his time for a short speech on the show. He said, "This collection is about archetypal clothing, about taking the recognizable but changing it through silhouette and cut—their form language is transformed. It is also about the DNA of Prada, clothes embedded with fragments of an identity we can recognize as fundamentally Prada. These are unmistakable and significant gestures, towards the heritage and history of the brand, and to the meaning of Prada now."